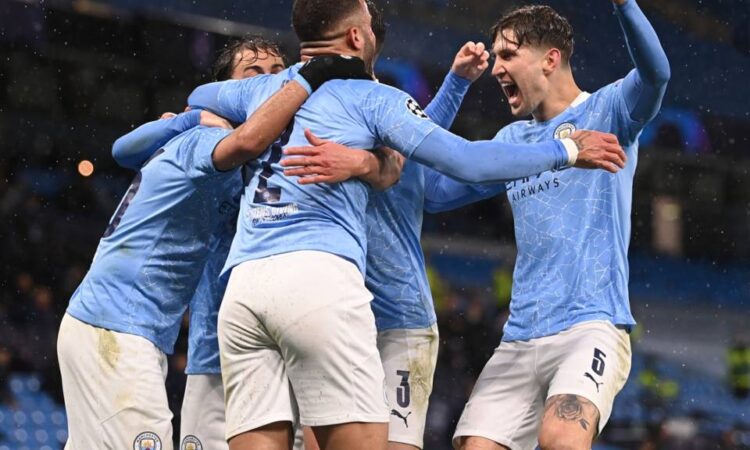 Manchester City has been hoisting domestic trophies for a decade now, but its ambitions have always reached well beyond English borders. To truly take their place on European soccer’s top shelf, the Sky Blues have needed to not only sustain excellence at home but win the UEFA Champions League.

On Tuesday, they moved a step closer to continental glory by vanquishing undermanned Paris Saint-Germain, 2-0, in the second leg of their semifinal for a 4-1 aggregate victory.

They’ve won the English League Cup. They can clinch the Premier League title this weekend. And on May 29 in Istanbul, they’ll play in the Champions League final for the first time in the competition’s 66 years.

The opponent will be Chelsea or Real Madrid, which on Wednesday will clash in London in the second leg of their semifinal. They drew, 1-1, last week in Madrid.

“What we have done these four years is incredible,” he said of the seven trophies in domestic league and cup competitions. “And reaching the [Champions League] final helps you to understand what we’ve done. . . . It is so difficult. It’s the toughest one — the quality of the opponents, the composure you have to have to have [during] the toughest moments. And we did it.”

Manchester City’s Riyad Mahrez, a French-born Algerian attacker who had the winning goal in the first leg in Paris, scored early in each half of Tuesday’s hot-tempered match in wintry conditions at Etihad Stadium. The performance capped a dominant turnaround after the club faced a 1-0 deficit through one half of the first match last week.

“When you saw the most character, the real character of our team, was when we went to halftime losing one-nil and we come back and put on a show,” center back Ruben Dias said. “That says the most about our team: When the difficult times come, we step up.”

Already facing an uphill battle, PSG played without superstar Kylian Mbappé, whose calf injury kept him in a stadium jacket the entire evening. Mbappé, a hero of France’s 2018 World Cup championship, entered the day with 37 goals in 43 appearances across all competitions this season, including eight in 10 Champions League matches.

He was not in uniform Saturday for a 2-1 victory over Lens in France’s Ligue 1, an absence suggesting he would use the time to heal for the Manchester City rematch. That was not the case, and without Mbappé, heavy burden fell on Neymar, the magnificent Brazilian attacker.

A freakish storm of hail and snow littered the field before the game, testing the players’ footing and passing touch. The visitors were unbothered, attacking with furious ambition.

PSG received a penalty kick in the early moments, but after watching video replay of the ball striking Oleksandr Zinchenko’s shoulder, not his left arm, referee Bjorn Kuipers overturned his initial decision.

they had to come at us,” Mahrez said. “We wanted to press them from the beginning very high. We knew they were going to take risks and we could [attack] them in the counter.”

Manchester City went ahead in the 11th minute on a rapid sequence that began with goalkeeper Ederson. Much more than a shot-stopper, the Brazilian is known for his footwork and distribution. He responded to PSG’s high pressure by driving the ball well beyond midfield and into the path of Zinchenko sailing down the left wing.

The Ukrainian chased it down wide of the penalty area and crossed to Kevin De Bruyne at the top of the box. A defender deflected the low and powerful shot to Mahrez on the back side for an angled one-timer past goalkeeper Keylor Navas.

Hardly deflated, PSG responded with energy and purpose. Marquinhos, who scored in the first leg, sent a soaring header off the crossbar and, with Ederson stranded after a giveaway, Angel Di María missed an open net by a whisker.

The pace and intensity did not let up until the halftime whistle, which allowed PSG Manager Mauricio Pochettino to plot a desperate course and Mbappé to prepare for a possible entry. He turned out to be a decoy, never leaving his seat.

PSG’s second half began with promise before unraveling. In the 63rd minute, Manchester City counterattacked with speed and precision, culminating with Phil Foden’s cross to Mahrez for an easy finish on the back side. PSG was done, and there was no need to risk further injury to Mbappé, who will be needed in the tight Ligue 1 race.

PSG was left shorthanded in the 69th minute when Di María was red-carded for stomping on Fernandinho’s lower leg while both were out of play.

PSG’s nastiness continued, but at the end, Manchester City players flashed smiles — and tears of joy. Their supporters had waited a lifetime.

“It is nice to reach the final, but it’s not the same [without fans],” Guardiola said of the spectator-free match. “We miss them.”