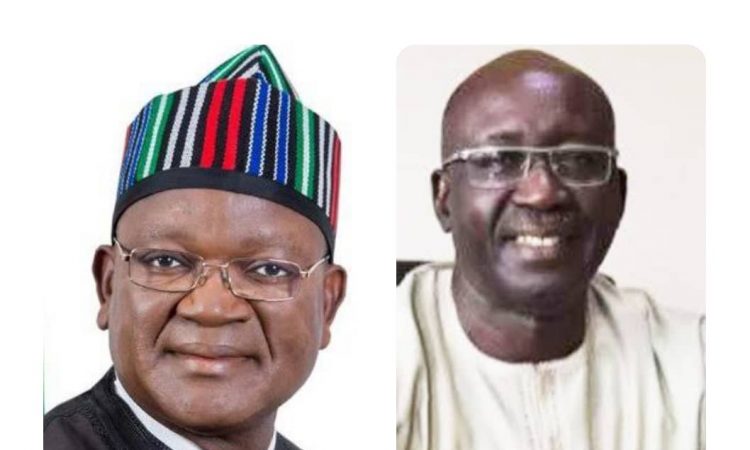 The position of Governor Samuel Ortom of Benue State as the leader of the People’s Democratic Party (PDP) in the state is increasing becoming untenable because of subversive scheming by the National Chairman of the Party, Dr. Iorchia Ayu, sources in the party say.

It is learnt that after the party in the state agreed on producing consensus candidates for all positions in the 2023 elections, the onus now fell on Dr. Ayu, Gov. Ortom and Sen. Gabriel Suswam, a former governor of the state, to draw up the final list of gubernatorial candidate and the National Assembly candidates in the state, especially in zones A and B.

But during a meeting of the trio on the 31st March, 2022 to produce the guber candidate, which had been zoned to Jechira federal constituency and further micro zoned to Vandeikya LGA, Dr. Ayu, a former Senate President and a three time minister, and Gov. Ortom worked at crossed purposes.

Sources privy to happenings in the meeting, said Ayu is hell-bent on bouncing back as the political godfather of the state, a position he held and enjoyed at the return of democracy in 1999 during Akume administration were he allegedly outsmarted Gamade to become Akume’s political godfather.

If Ayu succeeds in installing Rt. Hon. Titus Uba as governor and with his position as National Chairman, Ortom will be shoved aside and his position in the party will be consigned in the history lane.

While Sen. Suswam deferred to Gov. Ortom as the leader of the party in the state and conceded to him the privilege to choose a candidate for the party, the National Chairman insisted on having his way, something which led to a stalemate. Thus, the trio would meet again on the 7th April, 2022, when it is hoped a consensus guber candidate for the party may emerge.

Though Gov. Ortom had in the past said publicly that he doesn’t know who will succeed him and that he hasn’t anointed any successor, it is believed he has his eyes on a certain candidate but certainly not Uba because often times, the Governor is quoted as saying “Uba has nothing to govern the state”

However, sources said Dr. Ayu has already brokered a pact with the current Speaker of the state assembly, Hon. Uba, to hand him the guber ticket.

It is alleged the speaker, apart from oiling the palms of the national chairman with huge sums of money, has promised to hand over the state to the son of Ayu, when he must have completed his eight-year, two-term tenure in 2031.

Besides, it is learnt Ayu finds the attraction and pecks of once again becoming the state’s powerful godfather irresistible, hence his determination to toperdo Gov. Ortom’s position and interests.

Feelers from Benue, particularly, from Vandeikya where the two aspirants hail from and where it is most likely the candidate will emerge, however, show that the people do not fancy the two aspirants.

The speaker, Uba, is accused of poor performance with little or no impact in his immediate, Kyan constituency.

Allegedly, he is also said to have an unsettled home as a result of frequent battering of his wife and also lacks emotional intelligence, he is said to be temperamental, to be Governor.

Besides, he is seen as one who lacks the exposure to attract the much needed foreign investment in the state.

There are concerns that the prevailing scenario may just hand the opposition All Progressives Congress (APC) a golden opportunity to snatch power from the PDP in the state.

Party stakeholders in the state are of the opinion that if Dr. Ayu insist on lording it over Gov. Ortom, who is an adept grassroot politician, the APC which parades an array of credible aspirants, will cruise to victory come 2023.

Also, sources close to Ortom are worried that his senatorial ambition my be threatened if the scheming by Dr. Ayu sails through.

“His Excellency, Governor Ortom was instrumental to Hon. John Idyegh (Gboko/Tarka) decamping from APC to PDP but the way things are going now, especially, the way our respected national chairman of the party is insistent on imposing his candidates on the party, Idyegh may not go back to the green chamber. Dr. Ayu prefers to hand over the National Assembly ticket to Hon. Terzungwe Atser, his Ipav brother. When that scenario plays out, His Excellency will also lose out because Gboko/ Tarka will definitely go to the opposition. It will then become difficult for the governor to clinch the Senate seat with only Makurdi/Guma and Gwer/Gwer-West federal constituencies,” source who spoke under anonymity, said.