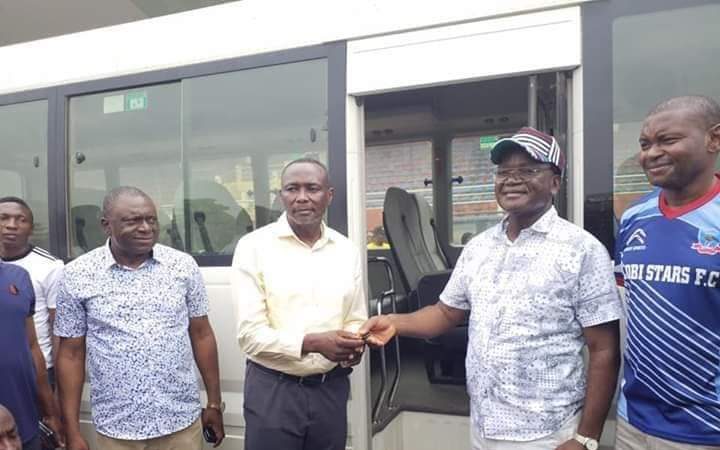 Governor Samuel Ortom has impacted so many other sectors in Benue state in the past over six years of his stewardship as the Governor of Benue State, but the Story of Lobi Stars under his administration clearly stands him out among all his colleagues in the country in the period under review.

Though the professional stabilization of the club started by the immediate past administration by relocating the club from ministry of Sports to Government House with the Deputy Governor as the chairman of the club.

As progressive as the decision was, the club was ran without a board to oversee the activities of the Chief Executive Officer who is the Vice-Chairman.

After six months of observing the situation me met on ground, Governor Samuel Ortom constituted a board to oversee the activities of the club with the appointment of a professional as the Vice-Chairman.

Governor Ortom in his wisdom, thought it wise to retain the club as a parastatal in Government House despite pressures from different quarters, a decision that was an informed position given the demands of professional football.

For Lobi Stars to be effective and operate as a professional football Club, he placed the club on first line charge.

The decision to place Lobi Stars FC on first line charge placed the club on a seamless financing as the club gets its finances as and when due.
Though Lobi may not be the richest club in the country, but the structure created by Governor Ortom makes it the most professional in the Nigeria Professional Football League, NPFL.

Lobi Stars under Gov Samuel Ortom remains the only NPFL Club that has never owed salaries of players and management in the over six years of his administration.

Governor Samuel Ortom has approved Lobi Stars Football Academy in four(4) categories to enhance local discovery of talents. The academy has since taken off.

The attention enjoyed by the club helped in no small measure to ensure that the club emerged winners of the NPFL 2017/2018 season and representing Nigeria in the CAF Champions League where the club reached the group stage, a feat that has eluded Nigeria for a very long time.

The performance of the team this season was not encouraging, Gov Ortom quickly appointed an experienced hand as the Vice Chairman and CEO of the club in person of Dominic Iorfa, a former professional footballer, Nigerian ex international and now a seasoned football administrator to Rescue the team from relegation. A job he has done well with Lobi maintaining 16th position on the log before this weekend’s fixtures against Sunshine FC of Akure.

Also worthy of mention is the donation of a brand new air-conditioned bus to replace the old bus which was gutted by fire. By this act, he demonstrated his commitment to the welfare of the players.

As the tenure of Governor Samuel Ortom enters its twilight, it is expected that whosoever will succeed him, should adopt this same template for the good and development of the game of football in the state.