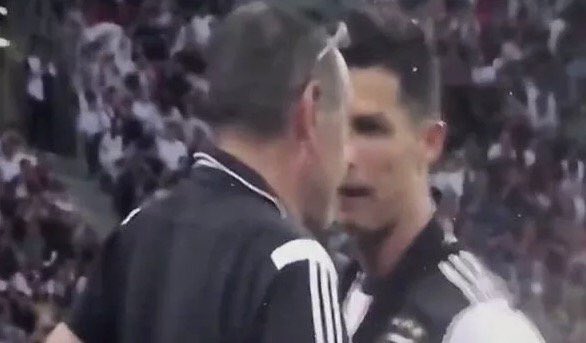 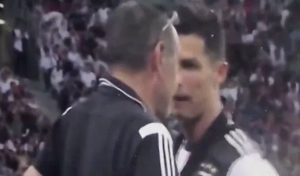 Juventus were in pre-season friendly game  on Sunday afternoon against Tottenham as the Italian side eye a win on their first game under Sarri.

The Italian was appointed as the club’s replacement for Massimiliano Allegri last month after the 51-year-old choose to quit.

Juventus and Tottenham were playing   2-2, with Ronaldo and Gonzalo Higuain scoring for the Old Lady and Erik Lamela and Lucas Moura were on the scoring sheet for Spurs.

Harry Kane gave the English side the win with a brilliant during the dying minutes.

However, Ronaldo appeared to  be furious after Sarri decided to substitute hom with the game still up for grabs.

The Portuguese Superstar was taken ogg by his manager and replaced by Matheus Pereira. 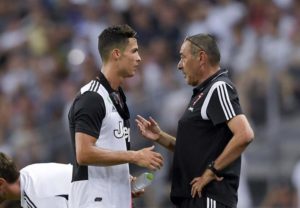 Has Ronaldo walked out of the pitch, he had a tense exchange of words with his boss on the touchline.

Ronaldo and Sarri initally clasped hands where the 34-year-old leaned his head in, looking none too pleased being substituted.

Sarri responded by shrugging before camera footage pans away from both men.

10 Absolutely Annoying Things That Can Trigger Even The Calmest Nigerians