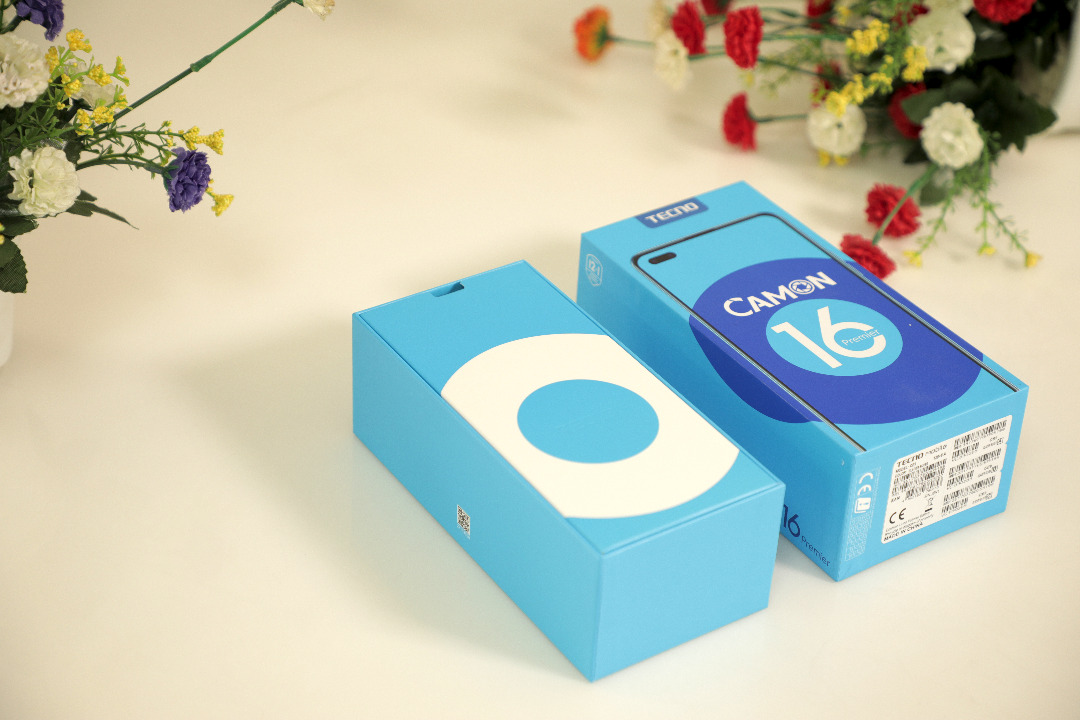 The TECNO Camon 16 Premier comes in the same eye-catching box that TECNO is known for. It features two gorgeous shades of blue and the TECNO Camon logo on the back and front. This is off-course, much similar to the previous CAMON 15 and all other predecessors. However, we still love this box design for all its worth – its sleek, captivating, and quite stunning. 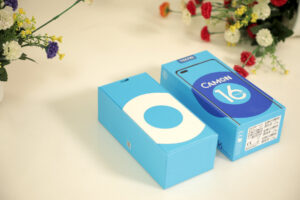 Concerning the TECNO’s Camon 16 Design, we’ve still got the polycarbonate skin once more. Therefore, the TECNO Camon 16 Premier still looks a lot like the previous Camon 15 series. The polycarbonate skin is off-course superior, eye-catching, and durable. However, TECNO has upgraded its size from the 6.6 Inch device we got a few months back to a 6.9 inch IPS LCD device, which feels sturdy and impressive in our hands. 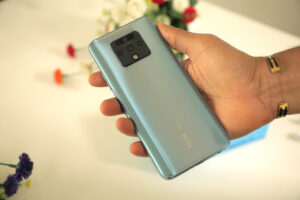 Even so, the graded textual design on the rear is equally lovely. But, it equally makes a remarkable impression, especially if you consider looking forward to five cameras (more on that later). The set-up is in a circular format and quite different from the Camon 15, which had its four rear cameras in a vertical arrangement. At the base, you will find the TECNO’s brand name engraved in silver.  Overall, the TECNO Camon 16 Premier is only available in one color, a Glacial Silver. 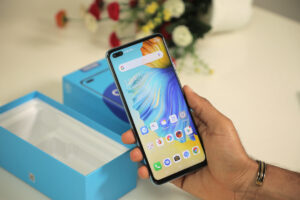 Nevertheless, movie lovers like myself always appreciate the extra screen space, as long as there’s no obstruction. Hence, the dual-in dot at first glance seems a let-down. However, if you factor in, you have a 6.9 Inch device. You know it’s massive for big devices lovers, a delightful upgrade. 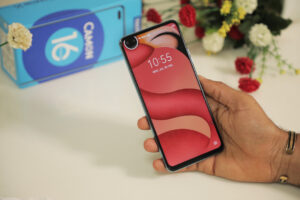 However, one thing standouts in the minds of everyone, -where is the fingerprint scanner? 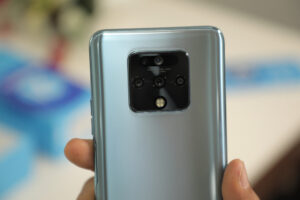 Right, there to the left side is the fingerprint scanner. Unlike previous TECNO smartphones, including the Camon 15, it is conveniently side-mounted.

As said earlier, the TECNO Camon 16 Premier is an FHD+ screen. But what you don’t know is that it supports HDR10+ and has a 60Hz refresh rate. This is the first time any TECNO smartphone will be coming with such a massive upgrade. If you are a gaming lover, then this is a pleasant addition that will minimize lags while gaming.

Even more, the Camon 16 Premier comes with Android 10 based on the custom HiOS 6.0 UI. For graphics, you will also get PowerVR GE8320GPU, and the processor is Meditek’s Helio G90T chipset built on the 12nm process and clocked at 2.35GHz.

To the TECNO Camon 16 Premier’s right-hand side, you will find the volume rockers and end button, in the same position as other TECNO smartphones. 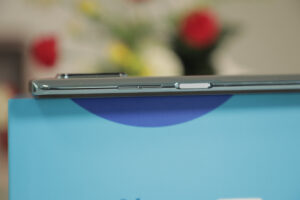 You have the 3.5 headphone jack, speaker grills, USB/Charging port, and earpiece port at the base. 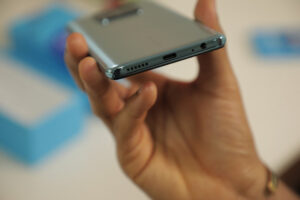 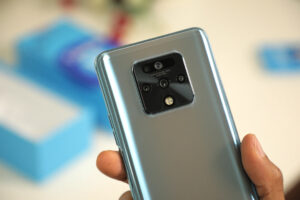 Unlike predecessors, TECNO Camon 16 Premier comes with a fantastic camera set-up. The Camon 16 Premier comes with five AI camera, which is a mega upgrade from before. It is headlined by a Sony IMX686 6P Camera Sensor, paired with a 64MP Ultra-clear lens. Next, you have an 8MP ultra-wide-angle camera, a 2MP macro Shooter, and a 2MP Bokeh lens. Besides the Sony Camera sensor, you have four other LED sensors, and features such as HDR, Panorama, Bokeh, and lots more. It also shoots incredible 4K video at 30fps and 1080p at 30fps, which are welcome additions.

On the front, you have a 48MP selfie camera plus an 8MP ultra-wide-angle camera with dual-LED flash. The front camera equally comes with stunning portrait mode powered by TAVIOS for perfectly detailed and clear selfies you would love.  It also supports HDR at shoots 4k and 1080p videos at 30fps.

You will also get a massive 8GM RAM, which means more multitasking power. Internally, you have 128GB space, but you can expand to 512GB via the microSD card slot. This adds up, especially considering the battery upgrade from 4,000mAh for the Camon 15 to 4,5000mAh. It equally comes with a 33W fast-charge, which is remarkable, and from our tests, you can charge the device in less than an hour.

What’s in the box?

Like all TECNO smartphones, you will always get loads of accessories to go with your purchase. First off is the USB Type C Cable. 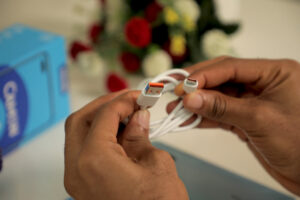 Then you have the 33W Charger, which is quite bigger than the one used in the Spark collection but so worth it. However, some people in need of compact travel charger may not like this one since it won’t fit into your pocket. 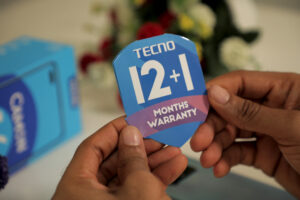 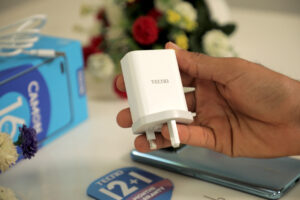 Finally,  you will have generic in-ear headphones, which you cannot expect to give you the best sounds. I still prefer getting an external pair over using whatever comes with my new smartphone, just saying though. 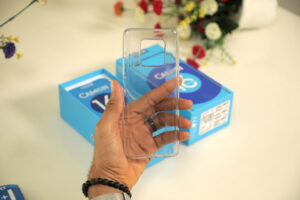 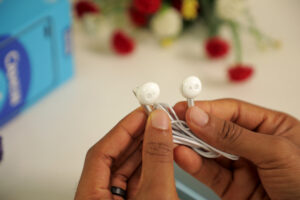 For the first time, I’ve got a casing that loves quite good, since it’s more transparent than the grayish container we’ve been having. This silicon gel-like case is also durable and will keep your phone from scratches. For someone passionate aesthetics, I’m so in love with the new casing too.

Overall, the massive 6.9-inch TECNO Camon 16 Premier is an absolute buy. If multitasking and gaming are your things, the Camon 16 Premier is a beast of a phone. With its gaming-centric Helio G90T processor aided with 8GB of RAM, 4,500mAH battery power, 33W flash charge, 90Hz refresh rate, and six AI Cameras, it is an impressive smartphone. However, we don’t like the fact that this device comes with a lot of bloatware, thankfully though, you can uninstall some of them.

The Camon 16 Premier is available in Nigeria at a retail price of N115,800 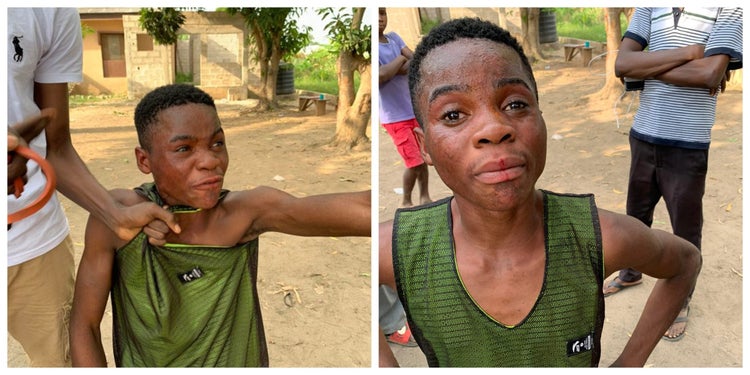