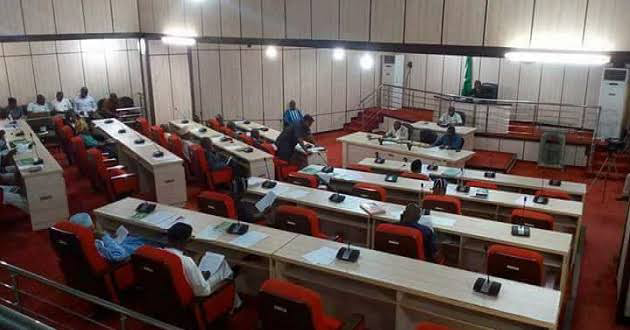 Governor Of Benue State, Samuel Ortom has written to the Benue state House of Assembly to request the 9th assembly led by his godson Titus Uba to approve the borrowing of another 40 billion Naira to enable him to finance the 2022 supplementary budget.

Our source from the Assembly who pleaded not to be named said Rt. Honorable Cheme who is the majority leader took custody of two correspondence from Governor Samuel Ortom, and the assembly PDP caucus opted to work one and leave another pending till they return from recess in June.

Below is DMO debt report,the read arrow is for Benue State .

For Now, the state house of assembly has approved Ortom’s Supplementary Budget, in a statement signed by Wuese Orshi who is the Chief Press Secretary to the Honourable Speaker, says “Benue State House of Assembly has received the 2022 supplementary budget of over twenty-two billion Naira from Governor Samuel Ortom for consideration and approval”.

According to the statement, “The supplementary budget was presented to the House by the Majority leader, Rt. Hon. Cheme during Tuesday’s plenary”.

The Chief Press Secretary to the Speaker said, “Earlier while reading correspondence from the Governor, the Deputy Speaker, Rt. Hon. Christopher Adaji who presided over the sitting explained that the supplementary budget is to take care of the increase in the cost of procuring goods and services and some critical projects that were not captured in the main budget”.

He explained that “The Deputy Speaker accordingly referred the supplementary budget to the House Standing Committee on rules and business for further legislative processes”.

Analysts have looked at the items mentioned by the governor and conclude that the governor is borrowing huge sums to facilitate the elections of His Godson who he has endorsed as the PDP consensus candidate in Benue state.

It could be recalled that Governor Samuel Ortom has pronounced the Speaker of the Benue state house of assembly Titus Uba as his successor and the candidate to fly the PDP party’s flag in next year’s general elections, a situation that has put PDP in disarray in Benue state.

Within 7 years, Titus Uba has approved loans to a tune of 128 billion for Governor Samuel Ortom, and approving 40 billion after recess in June will make it 168 billion, and political pundits believed handing him the PDP candidacy is a reward for his loyalty to Ortom.