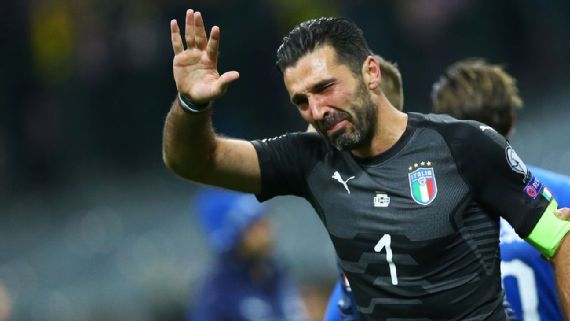 Gianluigi  Buffon, Italy’s veteran goalkeeper has announced his retirement from international football. Gigi’s announcement came after the Italian national team failed to qualify for the 2018 World Cup in Russia, first time since 1958.

The Azurris failed to breakdown a resolute Sweden team – failing to score and falling to a 1 – 0 defeat in Stockholm last Friday. A goalless draw in the return leg was all it took to truncate the Italian’s dream of repeating another world cup appearance in Russia.

The 39-year-old goalkeeper apologized to the fans for the team’s mixed campaign which has been a let down. He then dropped the bombshell of his retirement from international football.

“I’m not sorry for myself but all of Italian football. We failed at something which also means something on a social level. There’s regret at finishing like that, not because time passes.

“There is certainly a future for Italian football, as we have pride, ability, determination and after bad tumbles, we always find a way to get back on our feet,” he said.

Dropping an hint of his retirement from the national team, Buffon said, “I leave a squad of talent that will have their say, including Gigio Donnarumma and Mattia Perin. I want to give a hug to Chiello, Barza, Leo and Lele, who I had almost 10 years alongside.

“I thank the lads who were with us and, although it wasn’t enough, I hope that we gave them something.

Will Smith and Jada Pinkett-Smith Donate $5 Million to Tyrese Gibson.