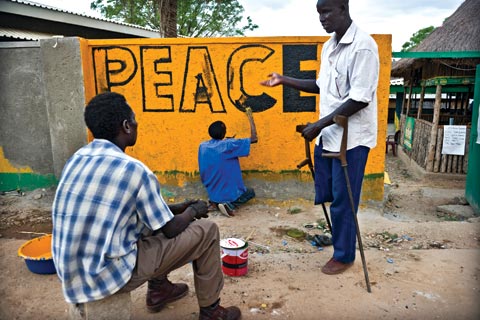 At first thought, so many people around the world believe Africa is a continent of crime and bloodshed due to the civil unrest ongoing in some regions of the continent. The latest being the Xenophobic attack in South Africa. However, a vast majority of Africans countries are very peaceful. Top 10 most peaceful countries in Africa in 2019

Liberia is suited in the western part of Africa with a population of about 5 million people. Libera current president George Weah was one time declared the best footballer in the world. Liberia comes on the 10th position on the list of the most peaceful countries in Africa and at the global level, it comes at the 60th position.

Senegal is a unique country with many languages, 36 to be exact. Named after the Senegal River, Senegal got her independence in 1960. The official language in Senegal is French. Senegal is the 9th most peaceful country in Africa and comes at the 58th position in the world.

Sierra-leone is a country in West Africa. She got her independence in 1961 and fell into a civil war from 1991-2002. Despite the Ebola outbreak which claimed over 3000 lives in Sierra-Leone, Sierra-Leone is still the 6th most peaceful country in Africa and takes the 52nd position at the Global level

Zambia is the home of the famous Zambezi River. Zambia is located in the southern part of Africa with a population of about 15 million people. In 2010, the World Bank named Zambia one of the fastest economically reformed countries in Africa. Zambia is the 48th most peaceful country in the world and  takes the 5th position in Africa

READ ALSO : Untold Truth: Reason Why South Africans Hate Nigerians With so Much Passion (A Must Read)

Ghana is a vibrant country located in the western part of Africa with a population of about 28 million people. Ghana is one of the fast-rising countries in Africa and at the global level, she is ranked the 44th most peaceful country in the world.

Malawi is a country in the south-Eastern part of Africa that was formerly known as Nyasaland. Malawi is also nicknamed the warm heart of Africa. Malawi is a democratic country currently under the leadership of Peter Mutharika, Malawi is the 3rd most peaceful country in Africa and the 40th in the world.

Mauritius is the most peaceful nation in Africa. A position she has been holding for three-years in a row. Mauritius has positioned itself as a trusted nation in terms of estate planning and wealth management. Mauritius is famous for her beaches, lagoons and excellent tourist reserve.

The people of Mauritius are multi-ethnic,multi-cultural and ever-smiling. Mauritius is highly ranked by many experts for democracy, economic and political freedom. Elections are held once every 5 years in Mauritius. Mauritius is the most peaceful country in Africa and 24th in the world.