Several individuals complied to the ‘sit-at-home’ order on May 30th declared by MASSOB to honour their fallen heroes. As members of IPOB push their agitations, a pro-democracy leader and a civil rights activist, Kayode Ogundamisi has revealed the faces of Biafra Diaspora Army via his verified Twitter account. 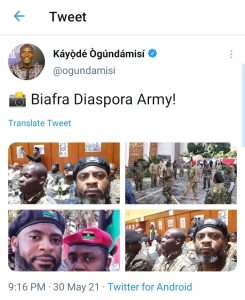 Kayode Ogundamisi who is  commentator on Nigerian and international affairs, shared about four photos to show their faces.

The recent death of Ahmed Gulak, a former adviser to Ex-President Goodluck Jonathan was blamed on IPOB and ESN. Imo State police spokesperson, Bala Elkana, in a statement said Ahmed Gulak was shot dead on his way to the airport and the suspects that were neutralised have been identified as IPOB members.
Several attacks on police stations across states have also been blamed on IPOB and ESN.
tweet
share on Facebookshare on Twitter
add a comment