The video which was posted on Twitter by CAF was captioned “karate kid”, but after a lot of replies from Nigerians, @CAF_online realized it was not a karate kid but a trendy type of dance move in Nigeria known as “Zanku” 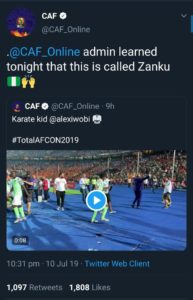 The 2-1 victory has pushed Nigeria to the Semi-final were they would playing either Algeria or Ivory Coast.